Following dinner at the Thistle Hotel at Altens, Aberdeen, attendees at the Federation Conference were treated to a marvellous evening’s entertainment. With John Caskie acting as MC the evening sprang into life with the Garioch Fiddlers playing an eclectic mix of jigs, reels and marches including several Burns’ songs which had the audience tapping and clapping. 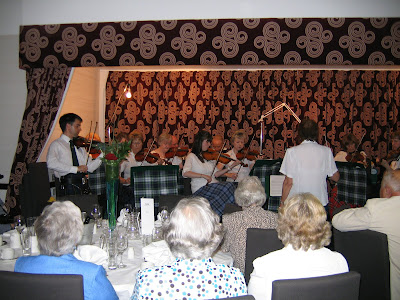 During the Fiddlers’ well-earned break the audience was treated to beautifully balanced vocals, a stunning array of instrumental music and comic poetry in Doric from an astounding array of young talent who had formed a band following their participation in the Federation Schools competition. 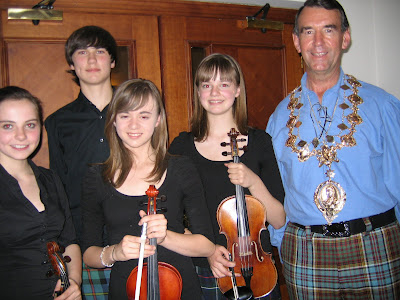 Although they had not known each other before the competition they so enjoyed each other’s fondness for Scottish music they decided to get together. This is a great tribute to the worth of the Federation’s Schools Competition and also to the Helena Anderson-Wright for promoting the youngsters of the Grampian region so avidly.
Following a lively AGM and three excellent presentations during the afternoon seminar, the highlight of Saturday's programme was the President's Inaugural Dinner at which David Baird assumed the role of President, always an emotional event for both outgoing and incoming Presidents. Senior Vice President Jim Shields and newly-elected Junior Vice President Bob Stewart applaud as David relishes the honour of donning the magnificent chain of office. 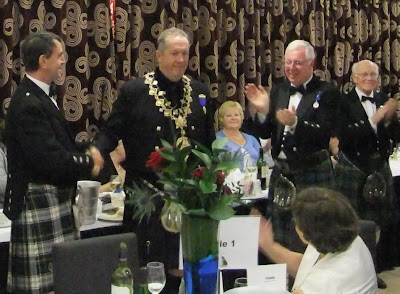 As a consolation I have the pleasure of receiving my Past-President's medal from David. 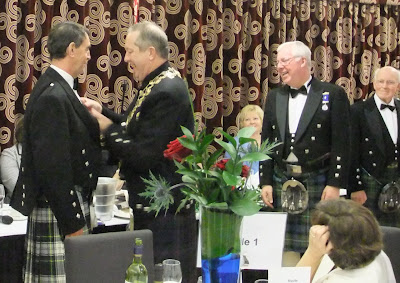 Posted by Current President at 12:49