I was delighted to be able to fulfil a regular commitment which I have undertaken for the past few years in ‘Addressing the Haggis’ at the Fleet Valley Nursing Home in Gatehouse of Fleet at lunchtime on the Poet’s birthday. The residents and the staff always look forward to their special celebratory lunch.

It was then a quick dash to Dumfries to attend the commemoration service in St Michael’s Church at which Burns had been a regular attendee in the last few years of his life before his untimely death at the age of just 37 years. The service was conducted by the Rev Maurice Bond and readings were delivered by Federation Senior-Vice President David Baird and Jane Brown on behalf of the Southern Scottish Counties Burns Association. The Rev Ella Pennington addressed the local school children and had them (and the adults) guessing answers to her questions relating to the use of a red flag in early days of motoring. Songs and recitations completed a most fitting service of celebration of the Bard’s life. 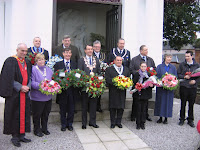 After the service, I laid a wreath on behalf of the Federation at the Mausoleum along with representatives from several other clubs and organisations, the whole event being co-ordinated by the Dumfries Burns Club. 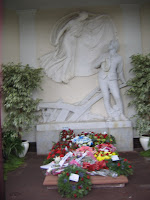 In the evening I had the honour of proposing the Immortal Memory at the Kirkcudbright Burns Club's Annual Burns Supper in the Royal Hotel Kirkcudbright. Despite Kirkcudbright's being only three miles from my home in Twynholm, this was the first time I had attended the Club's Burns Supper. The town has a direct connexion with the Bard because he stayed there overnight in 1793 during his tour of Galloway with his friend John Syme. He spent a pleasant evening in the Earl of Selkirk's House on St Mary's Isle regaining his good humour after being in a 'foul' temper the day before when his new 'Jimmie' boots were ruined during a storm. As Syme writes in his letter journal of the tour, "Mercy on me how he did fume and rage, nothing would reinstate him in temper." However, en-route to Kirkcudbright from Gatehouse of Fleet where they had stayed overnight in the Murray Arms Hotel, Syme showed him the Earl of Galloway's house. According to Syme, "Burns expectorated his spleen against the aristocratic elf, and regained a most agreeable temper." Syme thought the tongue-lashing of the Earl undeserved but was pleased it had restored his friend's good humour. The photograph shows President David Austin to my left and Adam Gray, Honorary Life President on my right together with the other speakers and artistes. 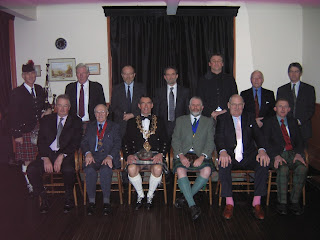 Posted by Current President at 08:44 No comments:

Following my attendance at the St Mungo’s Day Liturgy in Glasgow Cathedral earlier in the month it was a pleasure to return to the ‘Dear Green Place’ at the invitation of the Glasgow and District Association of Burns Clubs to lay a wreath at the Burns Statue in George Square on behalf of the Federation. We met in the City Chambers and after an introduction by President of the Association, Jane Jack, and a welcome from Deputy Lord Provost, Baillie Allan Stewart, we were led across the Square by piper Dougie Melvin. 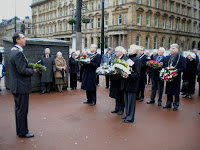 I had the honour of saying a few words before the laying of the wreaths and chose as my theme words from Burns’ song The Sodger’s Return.

For gold the merchant ploughs the main,
The farmer ploughs the manor;
Bur glory is the sodger’s prize,
The sodger’s wealth is honor!
The brave poor sodger ne’er despise,
Nor count him as a stranger,
Remember, he’s his country’s stay,
In day and hour of danger. 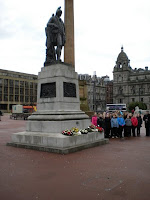 After the ceremony we were treated to a cuppa and sandwiches in the Parish Church Hall and royally entertained by the winners of the Glasgow Association’s children’s competitions. Masterful recitations from Fraser Kent and Leona Logan were complemented by lovely singing from the Wellshot Choir (who also sang at the monument as pictured), and the afternoon rounded off appropriately with a spirited rendition of Auld Lang Syne by the hale company.
Posted by Current President at 06:27 No comments:

A Night With the Ladies

22 January 2010
The Cairndale Hotel in Dumfries was the venue for the Burns Supper of one of the most active clubs in South West Scotland, The Dumfries Ladies Burns Club No 1. Organised on the night by Betty Haining with her usual efficient good humour and clear ‘instructions’ and chaired sympathetically by President Shona Shaw (pictured), the evening provided me with a most enjoyable opportunity to propose an Immortal Memory to the National Bard. 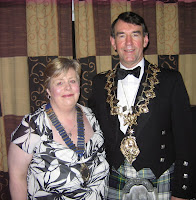 It was particularly fitting for me to acknowledge a group of ladies who do such a power of work on behalf of the Federation in so many different guises. The long list of Fraternal Greetings from Kindred Clubs, read out during the evening, provided testimony for the esteem in which this Club is held. A lovely night with lots of recitations and singing as well as the usual speeches.
Posted by Current President at 05:40 No comments:

With the help of James Cameron Ewing, Editor of the Burns Chronicle and also Head of Special Collections at the Mitchell Library in the 1930s, the Kirkcudbright artist Edward Atkinson Hornel built up one of the finest collections in the world of printed works by, or about, Robert Burns. As part of a drive to increase awareness of Hornel’s magnificent Burns Collection in Broughton House, a National Trust for Scotland property in Kirkcudbright, I have organised an annual ‘Evening with Burns’ for the last three years. 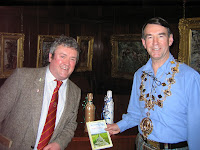 At this year's event well-known Burnsian Chris Rollie linked the history of Mary Queens of Scots to her brief time in the Stewartry of Kirkcudbright and gave a wonderful recitation of Burns’ poem Lament of Mary Queen of Scots. He also gave an ebullient rendition of The Holy Fair following a fascinating short talk about his recently published book entitled Burns in England. As Professor David Purdie says in the forward to the book, “Chris Rollie has added a further and much needed chapter which broadens and deepens our understanding of Burns…” 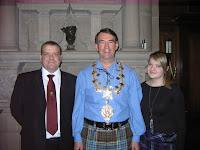 Through the wonderful singing by John Caskie and Holly Little, winner of the National Schools Singing Competition in 2008 (pictured above), I was able to highlight the famous James Johnson and George Thomson song collections which are in the Library, one with a note in Burns' own hand, inscribed to lovely Polly Stewart.
Posted by Current President at 01:24 No comments:

Creative Burns at The Midsteeple

I had the privilege of opening another event which was a legacy from the Year of Homecoming. As part of a commission from East Ayrshire Council, Scots poet Rab Wilson from New Cumnock had written twelve poems each based on a line from a Burns work. Examples included ‘I Saw Thy Pulse’s, Maddening Play,’ and 'Love Blinks, Wit Slaps, an’ Social Mirth' but the piece-de-resistance is his no-holds-barred tirade against the irresponsible bankers who brought Scotland’s reputation as a thrifty nation crashing to the ground. None is spared as Rab trains his linguistic sights on the main culprits in a poem entitled Wae Worth Thy Power, Thou Cursed Leaf! based on lines from Burns’ 1786 poem Lines Written on a Banknote. The exhibition is on at the Midsteeple in Dumfries and runs until 13 February and I can’t recommend it highly enough. 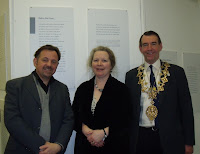 As Writer in Residence at the Dumfries and Galloway Arts Association (DGAA) Rab is passionate about the Scots language and Scots poetry and he demonstrates in this exhibition the full richness of the language as a vehicle for evocative poetry. He was particularly pleased to support the recent work of the Dumfries Burns Howff Club in producing a highly successful book, A Wee Kist o’ Verse which contains 100 of the best poems in Scots from the 600 entries they received from local Primary and Secondary Schools as part of their Homecoming Competition. The photograph shows Rab and me with Susan Garnsworthy, the Director of DGAA.
Posted by Current President at 01:01 No comments:

O! What a Glorious Sicht!

As a welcome break from the round of Immortal Memories I had the pleasure of stabbing the ‘wee beastie’ at the Kirkcudbright Rotary Club’s Burns Supper in the award-winning Selkirk Arms Hotel. Club members provided all the main speeches, the highlight being Anne Chaudry spirited plug for the lassies despite being vastly outnumbered by male Rotarians.

She wasn’t even cowed by the threat of the whistling blade that could ‘sned heids like taps o’ thristle.’ Having only started as a feature last year in recognition of the Year of Homecoming, the Burns Supper is sure to remain a regular fixture in the Club’s programme. Hopefully that is also the experience of other groups and organisations which started some Burns-related activities only last year but intend to run them again in the future.

Posted by Current President at 00:50 No comments:

As well as church and civic representatives (including the Rev. Jayne Scott, Minister of Culross and Torryburn which have historic links to St. Mungo), there was musical support from the Rutherglen Salvation Army Band, Carissa Bovill on clarsach, the St. Mungo Singers and the newly formed Russkaya Cappella, and dance from the Visual Statement Dance Company.

There was one very special part of the service when President, Mrs. Jane Jack, handed over a display case to house the copy of the Vita Kentigerni (the Life of Kentigern), on behalf of the Glasgow and District Association of Burns Clubs, as a thank you for the Homecoming Service which had been held in the Cathedral on 25th January 2009. This handsome gift to the Cathedral was dedicated by the Moderator of the Glasgow Presbytery, the Rev. Bill Ferguson. The congregation were then led by the St. Mungo Singers in a very stirring rendition of the Glasgow anthem “Let Glasgow Flourish”.
Posted by Current President at 10:03 No comments: