Cambusnethal Miners Welfare Club was the venue for me to speak at a most enjoyable Anniversary Dinner of the Lanarkshire Association of Burns Clubs (LABC). 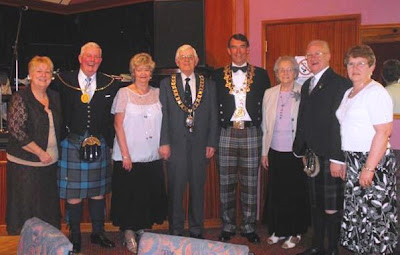 As I had pointed out in my speech that one of the most commendable aspects of the LABC was its unflagging support for the Schools competitions it was a particular delight to see two stalwarts rewarded for their efforts over many years. Bob Dalziel and Liz Totten (below with President Archie Cowie) were each presented with an engraved glass memento which acknowledged their inspirational contribution to the Schools competitions. 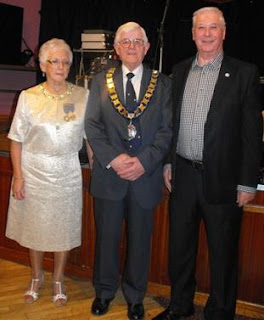 I also commented on the fine work done by the LABC in maintaining the cairn at Covington Mains and arranging the annual celebration of the visit made by Burns when he stayed there with farmer Archibald Prentice, en route for his triumphant first stay in Edinburgh in November 1786. Burns said of Prentice, “sound sense and plain warm hospitality are truly his.” I can only comment that I found the same good sense and warm hospitality still well to the fore within the membership of LABC.

I was lucky enough to be asked to speak at a very special anniversary dinner as Dumfries Ladies Burns Club No1 celebrated its 80th birthday in the Cairndale Hotel Dumfries. 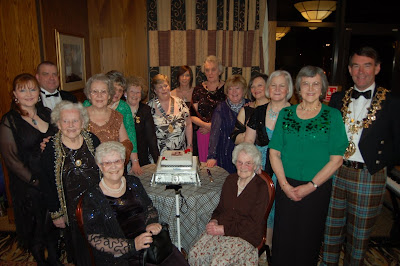 Seated in front of the illustrious gathering of past and current Presidents are Mrs Mary Schlag (right), the longest-serving member and Mrs Jenny Burns (left) the oldest member who both took part in cutting the beautiful cake later in the evening. 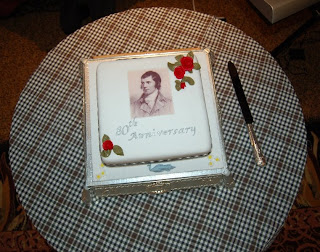 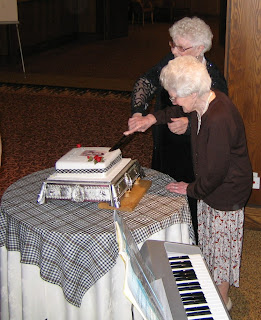 I tried to do justice to the club in recognising its generous contributions to charity, its participation in all aspects of the Southern Scottish Counties Burns Association, its support for the Federation’s Schools’ Competition and its hosting of the annual Tam O’Shanter recitation competition. Along with Mary Schlag, some have been members for over fifty years, some for over forty years and at least 13 have over thirty years service which is a great testament to the loyalty and longevity of the club. Keep up the good work and roll on your century!
Posted by Current President at 02:45 1 comment: