In her usual selfless fashion the Federation Chief Executive, Shirley Bell, insisted that there should be no great fuss made of her impending retirement during the Edinburgh Conference because it would detract from the main focus of the event, the inauguration of the new President. However, the Board decided it couldn’t possibly just let her sneak off without some tangible recognition of the tremendous amount of work she had done for the Federation over the past twelve years. The result was a wonderful dinner concert on 9th October in Easterbrook Hall, Dumfries, ably organised by Past President John Haining. Shirley, husband Jack, daughter Alison and daughter Lesley with grandson Hunter, were piped in to a standing ovation from 96 of Shirley’s friends who had travelled from far and wide to join in the celebrations. 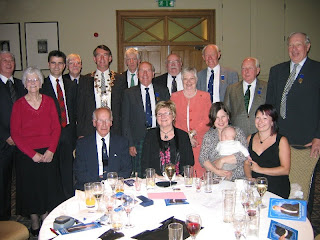 Shirley was particularly pleased to see eleven Past Presidents who had attended to pay their respects in person.

I was reminded quite pointedly that I shouldn't be in the
photograph because I wasn't a Past President!


Her good friend Peter Westwood (right) had produced a beautiful programme, produced gratis by Mac Creedon of Solway Offset Printers, outlining the format of the evening. 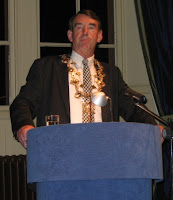 I had the unenviable task of making a speech which would do justice to Shirley’s immense achievements as the Chief Executive over those twelve years, often in the face of hostile opposition. However, after it, I had the pleasure of handing over a farewell gift on behalf of the Federation. Senior Vice President David Baird presented her with a painting from the Federation and Jim Shields presented her with a bouquet of flowers, also from the Federation. Jim Robertson conveyed the good wishes of the Robert Burns Association North America (RBANA) and presented a gift from them.

After dinner, John Caskie acted as Master of Ceremonies for a most enjoyable evening of entertainment from singer and raconteur William Williamson, young Burnsian Holly Little, JVP Jim Shields, fiddler Ian Kirkpatrick, accordionist John Douglas and even John himself. In her gracious farewell speech Shirley thanked everyone who had supported her over the years and wished her successor Sam Judge every success as he takes the Federation forward.

Most Burnsians will be familiar with the poem The Whistle written by Burns to record a drinking contest held on Friday 16 October 1789 at Friars’ Carse, the home of one of the three participants, Capt Robert Riddell. The winner of the contest was Alexander Fergusson of Craigdarroch. What a joy it was for me to attend the first-ever recitation competition featuring the poem, held exactly 220 years, to the day, since the original contest.

The Whistle William, Willie, and Andrew

The event was made all the more special because descendants of Alexander Fergusson, Andrew and William Fergusson-Cuninghame were present and had very kindly brought along “the little ebony whistle,” as Burns describes it, the trophy won by their doughty ancestor at the original contest.
The whistle had been brought to Scotland by a “matchless champion Bacchus” who accompanied Anne, James XI’s Danish queen in the sixteenth century. However, the Danish champ hadn’t reckoned on the drinking prowess of Sir Robert Lawrie of Maxwelton who duly won it off him before he in turn lost it to a member of the Riddell family.

There were four competitors (see left) and the worthy winner of the recitation competition was Willie Horne (see right), past winner of both the Tam O’Shanter and John Lapraik recitation competitions.
The inspiration behind the competition was Ian Millar from the Thornhill Burns Club and he and his club colleagues are to be congratulated on organising a splendid evening compeered, in his usual good humoured and enthusiastic way, by Ronnie Cairns.
Posted by Current President at 12:41