Bridgeton Burns Club has taken a prominent part in the regeneration of the Bridgeton ‘Umbrella’ and surrounding area as part of a Clyde Gateway initiative. 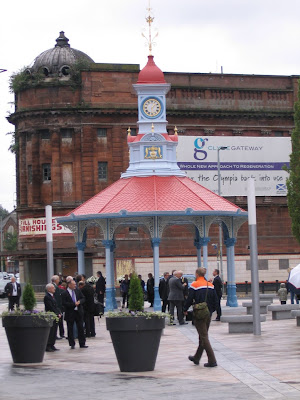 As their contribution to the project they commissioned a memorial to Burns, designed and build by student Alec Keeper from the Glasgow Metropolitan College, and I had the pleasure of joining members of the Bridgeton Burns club and Lord Provost Bob Winter at a ceremony to mark the unveiling of the striking sandstone and granite memorial with the very apposite word 'luve' carved vertically in relief. The photograph shows me with Jack Steele standing in as President of the Bridgeton Burns Club. 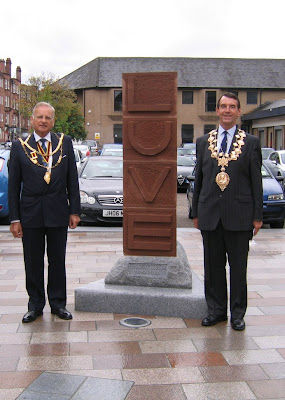 One-line extracts from songs and poems of Burns also feature on the paving as do the names of three Bridgeton men, John Simpson Knox, James Cleland Richardson and Henry May, who were awarded the Victoria Cross. The occasion was enlivened by the singing from local schoolchildren with renditions of My Luve is Like a Red Red Rose and Coming Thro’ the Rye. Following the ceremony we were whisked away in a 1957 Corporation Bus, provided courtesy of the local transport heritage group, to the Glasgow City Chambers for a civic reception where again the entertainment was provided by local primary school pupils. 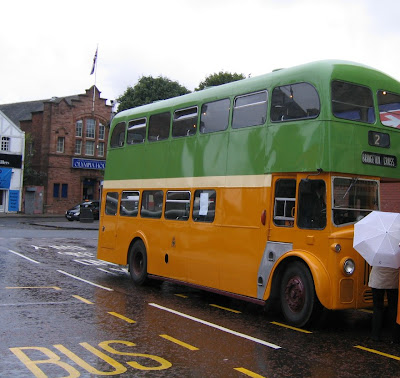 I am very grateful to the Bridgeton Burns Club for their hospitality and delighted to see at first hand the work they are doing with local schools in promoting the life and works of Burns.
Posted by Current President at 05:59