One of the great pleasures of my Presidential duties is to have the opportunity to recognise the efforts of groups and individuals dedicated to furthering the aims of the Federation. Having become all but dormant in recent years, the Edinburgh and District Burns Clubs Association (EDBCA) has really blossomed and further evidence of this resurgence was on show during an all-day series of events to commemorate Burns’ death in July 1796. 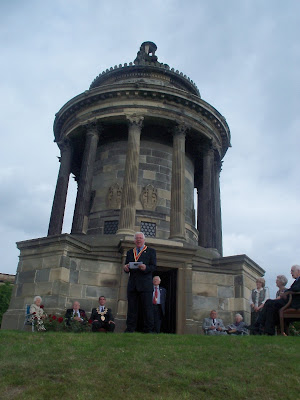 The event started with a commemoration at the Burns Monument on the Carlton Hill at which Federation JVP Jim Shields (seen here introducing the guests) had organised a mixture of poetry recitations, songs and speeches relating to Burns. I was particularly delighted to be involved in this because I had commented during my speech at the rededication of the monument in October 2009 that the Monument must be seen as a living space and not just as a cold, stone, artefact. This lively event was exactly the sort of thing I had in mind and gave real meaning to the memory of the poet’s time in Edinburgh.

Following the ceremony at the Monument, the party proceeded by coach to the City Chambers for a reception at which Lord Provost, the Rt Hon George Grubb, gave a most eloquent address referring to Burns’ time in the capital and to his writings. In turn I thanked the Lord Provost for the Council’s support in furthering the aims of the Federation through the work of the EDBCA and had great pleasure in presenting him with a copy of the Homecoming Chronicle.

For the final part of the day we repaired to the Lodge Liberton’s Hall for a fine afternoon and evening of entertainment. Firstly, representatives from Burns’ Associations competed for the inaugural Tom McIlwraith Trophy for poetry recitation in memory of Tom, an eminent Past President of the Robert Burns World Federation and stalwart of the EDBCA. 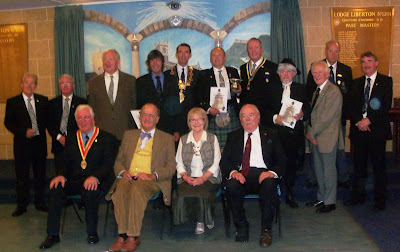 Judged by an eminent panel consisting of Professor David Purdie, EDBCA’s very own Margaret Anderson and Federation Past President Murdo Morrison (seated left to right on the front row with JVP Jim Shields far left), the competition produced a clear winner in Ian Buick with his outstanding rendition of To Mrs Scott, the Guid Wife of Wauchop House. 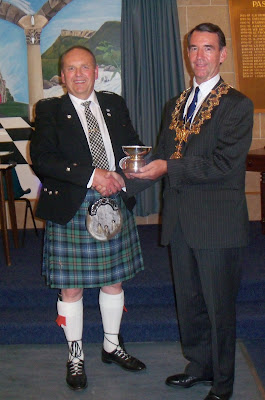 I was delighted to present Ian with the inaugural Tom McIlwraith trophy; he graciously recognised that the other competitors had also performed their chosen poems magnificently well. In summing up, the Chairman of the judging panel, Professor Purdie, highlighted the brilliance of Burns as a wordsmith and it was the expressive use of his language which the panel held as their main yardstick in judging.

A wholesome serving of haggis, neeps and tatties saw us through to a soiree where the assembled company took turns to perform their party pieces. Songs, poems and anecdotal stories of the highest calibre provided a most enjoyable and fitting finale to the day. Chief organiser Jim Shields and EDBCA President, Ian Chisholm, and his committee deserve immense praise for all their hard work in laying on such a wonderful event which hopefully will be repeated annually.
Posted by Current President at 12:24